HaldeCraft uses cookies to ensure you get the best experience on our website.Click to read our policies.
Cart 0
What? OK! Sure! At this point I'm certain that everyone - including International - has gotten their yarn (if they haven't, they haven't told me!) so let me show off the last three months of club colorways. The theme of the club was the beloved book "Watership Down," and this is the second time I've done that theme -- it's just too rich with color ideas! 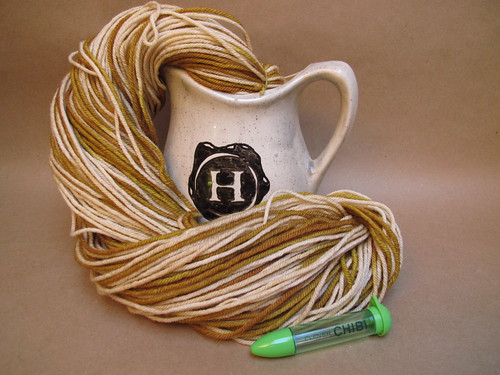 I started off January with my favorite of all three, Dandelion. Dandelion was one of the original Sandleford Warren rabbits, and is the resident storyteller. He is also the fastest rabbit, and was instrumental at the end of the war with Efrafa in bringing the dog up from the farm. If you opted for sock, the yarn was Andre, a soft tightly plied yarn that’s 80% Superwash Merino and 20% Nylon, and gets 6-8 stitches on a US 0-2. If you opted for Worsted, the yarn was Tepper, a 100% Superwash Merino that gets 4.5-5 stitches to the inch on a US 7-9. Swag was a Chibi, a small darning needle holder with two or three needles inside. I don't know about you, but I can't have enough of these (probably because I'm really good at losing darning needles). 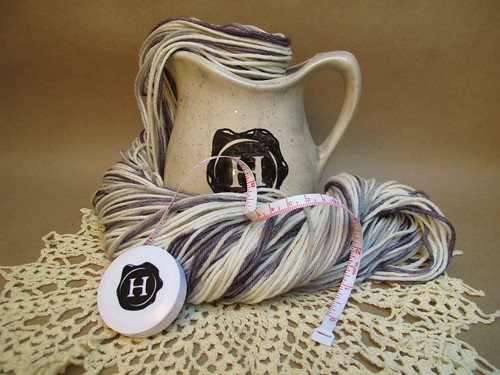 February was one of my favorite characters in the book; Kehaar. Yark! Yark! This is one that I wanted to do last time I did a Watership Down theme, but I had some problems with it. I went back to the drawing board (twice, actually, but who’s counting?) and now I feel that the color I came up with is deserving of the brave and snarky bird. If you opted for sock, the yarn was Andre, a soft tightly plied yarn that’s 80% Superwash Merino and 20% Nylon, and gets 6-8 stitches on a US 0-2. If you opted for Worsted, the yarn was Tepper, a 100% Superwash Merino that gets 4.5-5 stitches to the inch on a US 7-9. The swag this time around gives me a lot of joy even though it's tiny, because it’s something I’ve wanted since I started HaldeCraft - a round tape measure with my logo! You can get your own here. 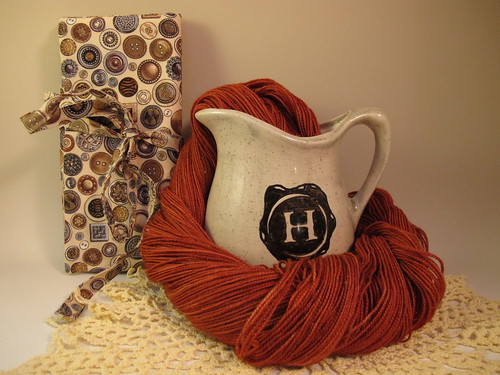 March was El-ahrairah; trickster rabbit, rabbit of the myths, the rabbit that all rabbits want to be, prince with a thousand enemies. If you opted for sock, the yarn was Kathleen, a limited edition/club only yarn with subtle sparkles! She is 75% Superwash Merino, 20% Nylon, and 5% Bronze Stellina , and gets 6-8 stitches on a US 0-2. If you opted for Worsted, the yarn was Windling, a 55% Alpaca/45% Wool that gets 4-5 stitches to the inch on a US 8-10. Swag was amazing. I went with a design idea to my friend Rhea of Tuesday Tutus, who took my half-baked idea and made it even better than it would have been had I tried to make these little needle rolls myself. My original intent was to have an item that was combination tool case and needle roll; to have something small enough for travel purposes yet large enough to bring everything you might need for a weekend (or week long) getaway. I wanted a place for DPNs or crochet hooks, a place for circulars, a place for some small tools (zippered, so they wouldn’t fall out), and of course a place for lip balm, because lip balm. Rhea really knocked it out of the park! Want to see other things she makes? Check out her Etsy shop! Sad you missed out? I don't have any extras available, but you can get a spot in the next round of club through the end of April. The theme is traditional Norse mythology and you can read about it and see club options here.