This week I'm going to start packing up June's yarn club, and that means that I can finally tell you about May! This month’s colorway is Siff’s Hair, and to my utter chagrin the labels were printed out with a typo – “Siff” should actually be spelled “Sif”. Insert ribbing here from the members of last quarter’s club, because of something that happened to their labels. Sigh. If I have a problem next time, it’s a trend….? And it’s already been pointed out to me that in the mailed-out dyer’s notes, there was a typo in the first sentence. Sigh. I give up… now let me distract you with the yarnie equivalent of jazzhands… PRETTY YARNS! 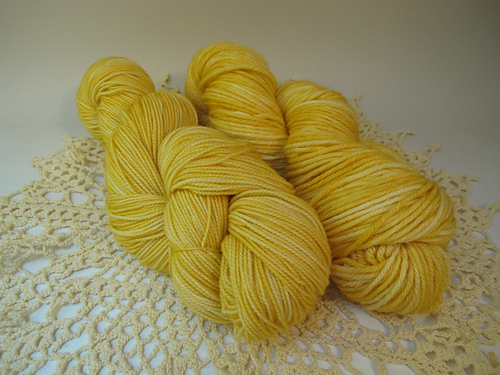 So who was Sif? Sif was Thor’s wife, Goddess of the Earth, and her famous long blonde tresses are said to signify corn or wheat, and the harvest. Thor much loved Sif’s hair, and Sif was extremely proud of her locks – almost vain, even. One night when she was sleeping, Loki snuck into her chamber and cut off all of her hair. Was there a reason, other than Loki wanting to cause mischief? If he had a reason, he was probably regretting it, because of the anger this brought upon him by Thor. Odin bade Loki to return Sif’s hair. Knowing that he couldn’t cause it to grow back without magic, Loki went on a journey to the dwarves to have them make for him a golden circlet Sif could wear, that would make her return. There’s a side story about this journey that also resulted in Loki bringing back this and five other gifts, including Skidbladnir, the best ship of all the ships (which can also be folded up and put in your pocket -- HANDY!); Gungnir, the deadliest spear; Gullinbursti, a golden boar; Draupnir, a magic golden ring that every nine days, produces eight rings of equal weight in gold; and Mjollnir, a mighty hammer (guess who claimed that one?!). Suffice to say that when Loki returned and Sif put on the circlet (in some stories it is a web of gold, in some, gold hammered to look like hair). Her hair grew back, and peace between Thor and Loki was … somewhat … renewed. I’m sure giving Thor the hammer helped smooth things over, too. 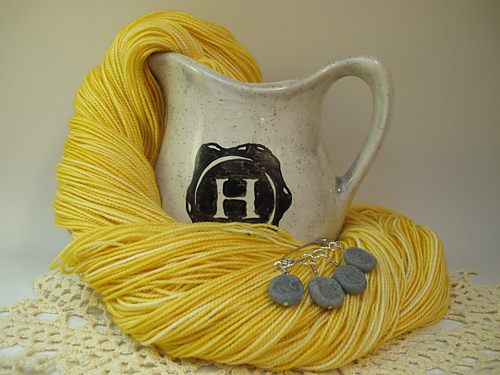 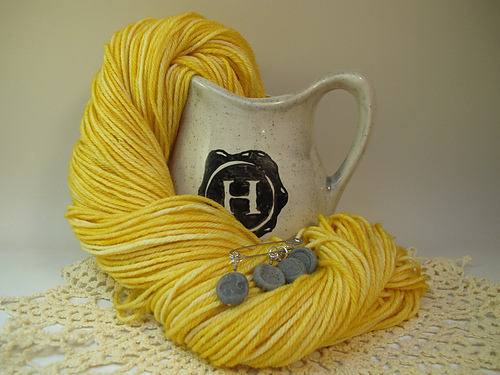 The worsted base choice was Tepper, a 100% Superwash Wool which gets 4.5-5 stitches to the inch on a US 7-9. The swag was stitch markers and to me they look like stone runes or markers (I do plan to eventually make some of these stitch markers for the shop). They are good up to about a US 8 needle. If I knew the recipient was a crocheter, I made special markers with a lobster claw, so that they can be attached to the yarn. And because I can't resist, here’s all 48 skeins together (that’s right, 48! I thought it was 46, but when I re-added everything, 48!) 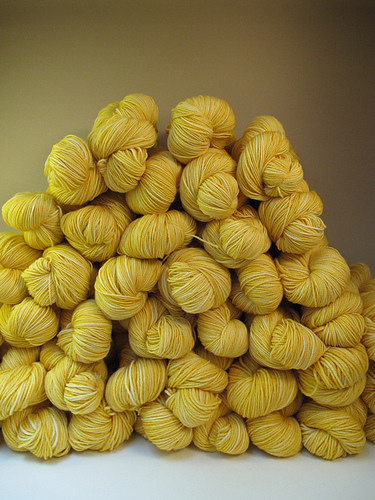 Mmmmmm. Pretty, pretty yarns. Thanks, y'all! PS. Curious to learn more of the Sif and Loki story? There is a sort of junior version here, a better version is here, and if you are a die-hard Marvel fan and confused as to why your Sif is a brunette, here are eight things Marvel got wrong about Thor and Norse mythology. And hey, I used to work in a comic shop, I collect comics, so don’t think I’m cracking on the comic readers -- this club is just more of a traditional take on the mythos. PPS. Sad you missed out on yarn club? Me too! So stay tuned for next round; spots open up at the beginning of July for the September - November club! I don't have my theme picked out yet, but I'm leaning towards something pretty heavily. I have to make my mind up soon so I can let you know what to look forward to!
Back to blog