Do you ever have one of those weeks where you suspect someone must have put a curse on you? A real "Murphey's Week"? Where nothing goes spectacularly wrong, but not a single thing goes exactly, 100% right? Yeah. Me too! What are you working on this week? This week I'm knitting on two different things; a sweater out of Emma that I've been working on while watching Game of Thrones on Sunday nights. I'm almost done with it... 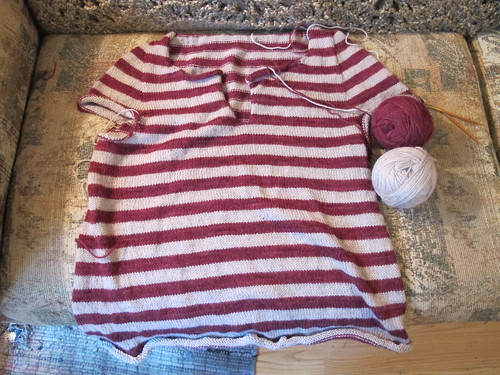 ... and I've been working on my June 12-in-'14 project, out of a skein of Andre in a test colorway for club yarn from last year. 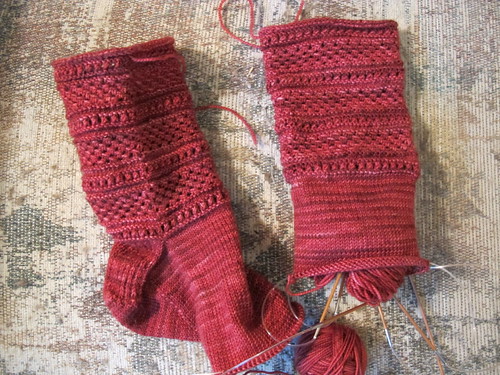 In addition I've been winding the July club yarn, which is mocking me -- almost every skein is getting tangled in some fashion... so normally while it takes me about five minutes to wind a skein of yarn, it's taking me upwards of 10 to 15 minutes. That might not sound like a lot, but when there's 48 skeins? That's four hours if nothing goes wrong, eight hours if it takes twice as long. So I feel I've been away from the computer more than usual this week, winding, untangling, winding, untangling, and winding! It's so worth it, though. I love the color, love the yarn, and have absolutely loved this round of club as a whole. In ceramics, as I have time here and there this week, I'm trying to glaze enough to fire the kiln. In the next firing will be some of the new jumbo-sized yarn bowls (I fired one a few weeks ago, testing a new painting technique, and while I love the result, the bowl broke in the firing... let's hope the next four that I'm putting in the kiln later today don't suffer the same fate). I also have a couple of custom orders, one of which is a remake from one I fired last time, but it exploded in the kiln. Did I mention Murphey's Law? I'll leave you with a picture from this morning, of That Poor Man's cat - who usually won't have a thing to do with me - "helping" me do a yarn inventory so I know what needs to be dyed. 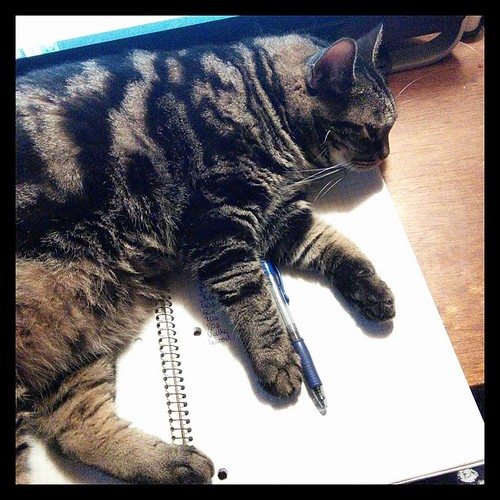 Yeah. "Helping." HAH! Hope everyone is having a good week!
Back to blog