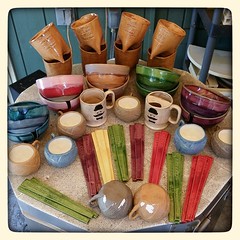 I'm feeling a little disorganized this week, but that's because I'm so excited about all the pies my thumb is in that I keep flittering from one to the other. In ceramics, I had an OK firing on Sunday. I'm having a problem with the yarn cups and the glaze... same problem I was having when using the red glaze a month or two ago, but with different colors now. And not the same colors! I glazed eight mugs, two each in four different colors. Two are shivering, like the red ones I mentioned, and I'm starting to think it's a problem with the slip (liquid clay) and not with the glaze. Ceramic life problems! Anyway, I'm also working on the next round of color tiles, and some mugs, and a few things for the upcoming Florida Fiber-In. And I think I've mentioned that I'm over the moon with my new plant markers! In soap, I mentioned yesterday that I have some sample fragrances up in the Miscellaneous Marked-Down soap listing; different versions of a Clove and Orange fragrance as I work with a customer on a particular fragrance. And in yarn, I'm starting to dye up the next round of yarn club (spots are still open until the 31st). I so want to show off what I'm doing - I love these colors - but of course I don't want to spoil anyone. Photos coming in a couple of months, then! In knitting, I'm about to finally have something off the needles for the first time in a month. I'm almost done with three different pairs of socks! In daily walks with the dog, I've gone about ten miles so far this week, which feels both lazy (if I'm shooting for a total of enough steps to equate to five miles a day) and tiring (those of you who also walk in over 90 degrees and above 90% humidity will know what I mean. With a heat advisory starting at about 10 AM every day, it's hard to get motivated to be outside for any length of time! I thought there was one more thing I was going to say, but now can't remember what it was. What are you doing this week? What are you working on, reaching for, proud of?
Back to blog