I was so busy the whole weekend I didn't have a lot of time to whip out my camera; I think this is the least number of photos I've ever taken at Fiber-In. 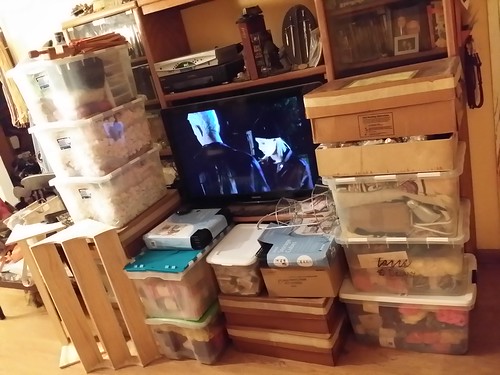 And when I went to pick up Rhea, after we got her bags in the car, the Rav looked like this: 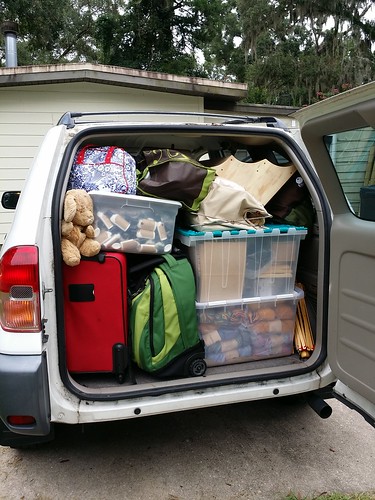 I should have paid closer attention when That Poor Man was putting it all in there, but I was busy trying to wind up the last of the handspun yarn that I'd set to dry overnight. This "not watching him pack" thing will come back to bite me at the end of the weekend. But I like jigsaw puzzles... how hard could it be to get it all in there, right? HAHAHAHAHAHAHAHAHAH foreshadowing.

Here's our booth after setting up on Friday night (we got there, set up, covered everything, checked into the hotel, went to dinner, then came back and uncovered and opened the booth): 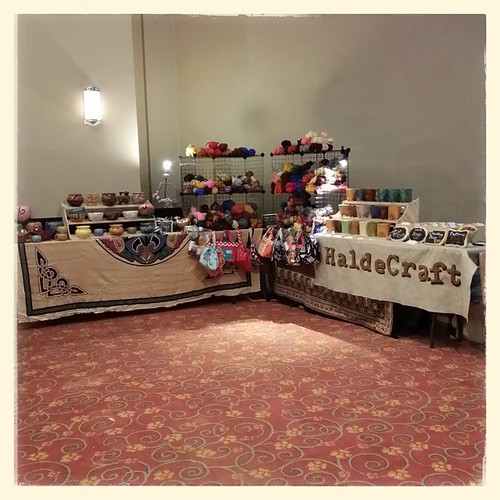 Friday night was fun; people trickled in after dinner and it was great to see old friends, catch up with the other vendors (I absolutely adore Jan and Leigh from Raspberries, and we were once again right next to Jane and Ginger of Ewephoric Fibers and I can never get enough of them), and to also sit and relax and spin a bit -- I'm lucky in that my booth is right next to the spinner circle, so I just set my wheel up at the end of the circle and then when I have a moment I can sit down, join the conversation, and spin! Speaking of, here's what I finished on Friday night; I'd had about half of it already spun, so it's not as impressive as it looks: 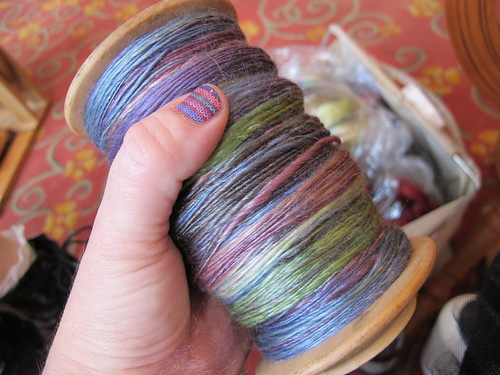 Saturday morning we got to the room early, and there were already other vendors getting ready for the day, which was hopping! This was my view most of the day: 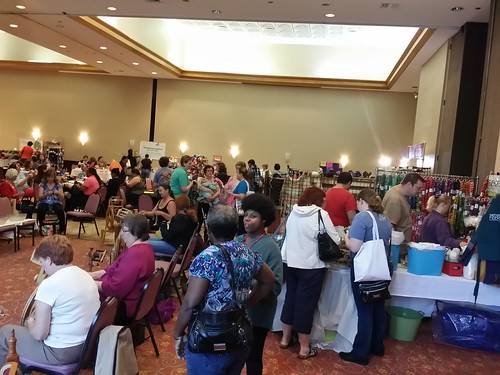 I was able to get some spinning in here and there and got four ounces of a lovely alpaca/silk spun up, and hey, it matched my tutu! 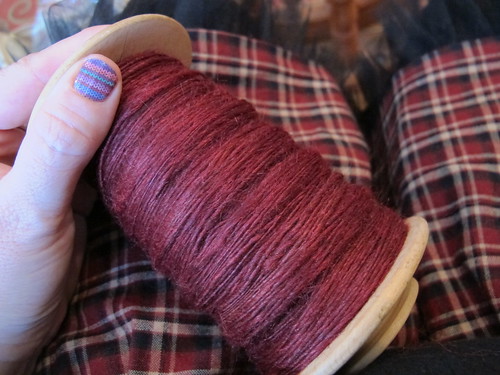 My mother came over for the event, for most of Saturday, and it was great to see her. She sat with us for a while - it was great to catch up with her because we hadn't seen each other in a couple of months - and she wound up getting more photos than I did!

Honestly, most of Saturday is a blur. There was the auction, and door prizes, and old friends and new stopping by the booth; I was able to put faces to a few people whose names I've seen pop up on Facebook, was able to reconnect with a couple of old Hanks Yarn and Fiber customers, and just generally had a wonderful, social time. We broke for an early dinner, then came back and kept going on Saturday night until close to 10. At that point both Rhea and I were getting a little glassy-eyed, so we called it a night.

Sunday morning we were the first people in the room, but we were quickly joined by other spinners and vendors, and soon Sunday morning was just as busy as Saturday. As everyone started to think about lunch, though, things started winding up. As other vendors started packing, we did as well -- reluctantly, because we didn't want the weekend to end!

And it almost didn't, as the batter in my Rav had died, and there was quite the comedy of errors trying to (a) find the battery and then (b) finding a jump. And did I mention the feral cat that jumped out at me like a jack-in-the-box when I popped the hood? AHHHHHH! Just about scared the life out of me! We eventually found the battery (it's under a removable plate, which was a little unexpected, since you'd think they'd want it front and center and easy to replace), got a jump, loaded and unloaded the car in the hot sun about six times trying to get everything to fit (remember how I didn't really pay attention when someone else was loading my car?) (oh -- and this was after having to truck everything from our booth about a block away from the hotel to the lot, since we couldn't move the car closer to the hotel), we got to an auto parts store, bought a new battery and had it replaced. To calm down from the excitement we stopped at Barberville Roadside Treasures on the way home and looked at horrifying taxidermy and giant metal chickens. We might have each come home with some new "art".

And that was Fiber-In! You can see all of my photos, even ones I didn't post here, in my Flickr Album for Fiber-In 2014. No taxidermy photos in it, I promise (but you might not want to scroll around in my other photos; taxidermy gone wrong gives me the giggles, but I hear it wigs other people out).