I'm not working on ceramics right now, actively (although I have so much that needs to be done! There's so much unfinished bisque in this office right now, I should start selling unfinished pieces!), but the week after next is "ceramic week" so I'll be getting my fingers back into my beloved clay, soon.

In yarn, I had a big update at the beginning of the week, and should have the spinning fiber photographed and listed by Friday.

My focus this week is primarily on soap, of which I am making a lot (including a surprise new fragrance). I should have everything wrapped, photographed if needed, and listed by early next week.

Mostly this week I want to talk about my knitting. As I already finished my October 12-in-14 project, I've been working on something I started a couple months ago but can finally make an official announcement about -- That Poor Man's youngest sister, the park ranger, is pregnant! I'm making her a baby blanket (and probably any animal hat patterns I can find) (for the baby, not for her) (although she'd probably wear them). Some of you might remember her as being called "Ranger Amy" from a park photography blog that she used to run that I would mention sometimes. 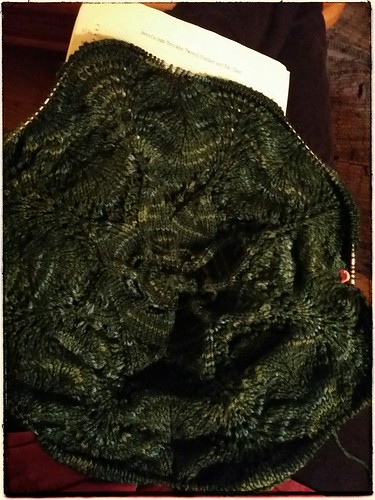 I've only been working on the blanket for a few weekends here and there since August (maybe July?) but now I'm in full-on MUST KNIT THIS mode. It's in Tepper, in a color that was actually the test color for Yggdrasil but I didn't like because there was too much variegation (it's three shades instead of the two that I went with for the final). I do get a lot of compliments on it, though, and that's good news for all you lovers of green -- I'll be releasing this color in January, and calling it "Ranger Baby".

How about you? What are you all working on this week?