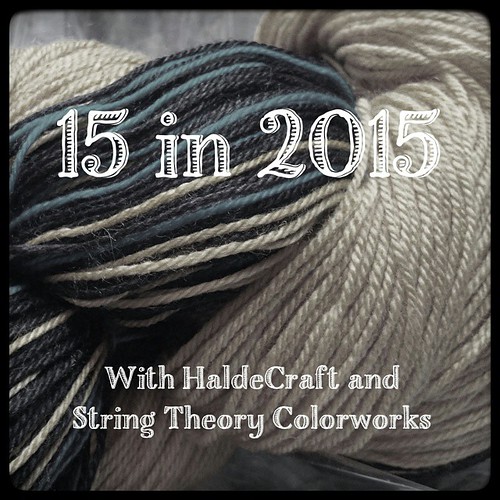 Play along with Lorena of HaldeCraft and Caitlin of String Theory Colorworks as we knit, crochet, spin, or weave 15 different projects during the calender year of 2015.

The rules, in brief:

- no projects may be started earlier than January 1, 2015

- you can knit or crochet or spin or weave one project at a time, or heck, cast on all 15 on January 1st, or even if you find out about this in November of 2015 and want to join in…. whatever! Just as long as all 15 projects are finished before midnight on New Year’s Eve!

plan ahead with your yarns and patterns or decide on the fly - your choice!

- while the prizes are sponsored by HaldeCraft and String Theory Colorworks, so of course we would love it if you used our yarn, here’s a secret… WE JUST FLAT OUT LOVE YARN. Please use any yarn or fibers you want!

The prizes, in brief:

Everyone who participates and completes all 15 projects will win a special gift set of a HaldeCraft bar of soap, hand lotion, and lip balm in an as-yet-to-be-determined matching fragrance and flavor set, and a special coordinating stitch marker set made by Caitlin of String Theory Colorworks, and a small project bag (with an as-yet-to-be-determined logo for 15-in-15). These will be mailed out at the same time, so to give folks until the end of December for finishing, these will likely go out during the first week or two of January of 2016.

Additionally, there’s a “show the love” prize! As there will be 15 individual FO boards on our Ravelry group for each of the 15 projects (“15-in-15 FO #1”, “15-in-15 FO#2”, etc), at the end of the event the project in each board that has the most “loves” will win both a $10 HaldeCraft gift certificate and a $10 String Theory Colorworks gift certificate (no matter if the project maker finished all 15 projects or not). If there are two or more with the same number of “loves” the winner will be chosen by the Random Number Generator, or RNG.

Additionally, five random people who participate and finish all 15 projects will be entered into a drawing to win one of the five remaining Orchard Bee sets -- if you don’t remember what those are, it’s a skein of solid-color HaldeCraft yarn, a skein of Self-striping String Theory Colorworks yarn, soap, lip balm, and stitch markers. Why should you get excited about this if you already bought the kit…? Because these five kits will also come with a yarn bowl, painted to match the yarn!

(We reserve the right to randomly add more prizes if, later in the year, something strikes our fancy and/or we become obsessed with something! Yay, surprise prizes!)

Curious? Want to know more? Excited? Want to participate? We've started a Ravelry group here, where we'll chat, cheer each other on, and post our finished objects.