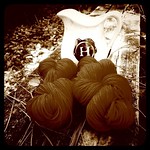 The last couple of weeks have kept me offline a bit, but boy howdy do I have a lot to show for that! All three months of yarn club is dyed, and while February and March aren't rewound yet, I got January out the door and the feedback on it is really positive. Personally I think I'm going to need another sweater's quantity of it for myself -- to actually make something, not just to hoard and coo over. I swear! 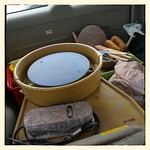 But the main reason I didn't get around to posting last Sunday is because I found a pottery wheel on Craigslist and my husband and I drove a few hours south of here to try it out and pick it up (ok, I tried it out... and he picked it up and carried it to the car. We have a good division of labor in this family). Of course Google Maps lied to us and we wound up across town from where we needed to be, but it all worked out in the end and not only did I buy this awesome little wheel, but the seller gave us some fresh cauliflower from her garden as well! It was delicious for dinner that night with a little butter and garlic. And now I'm looking forward to taking more pictures like.... 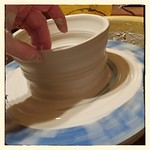 .... like this one! Trying out my new wheel. It's got a few issues -- it's been stored in a garage for a while and needs some oil and TLC, but that's nothing we can't handle. Now I'm looking forward to practicing, practicing, and practicing! We went the next day, Monday, to a ceramic supply store in Ocala, and while they were out of low-fire white clay (a class had just bought them out), I did pick up a couple of extra bats so that I can throw more than two things at one sitting. I did get some red clay, so expect some rather colorful pictures late next week! 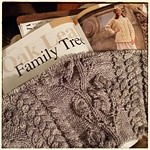 While we were in the car driving around, I brought along some knitting that has been long neglected. Seriously, I don't think I've picked this up in two years. It's a lovely complicated cabled pullover, and while I finished the back a few years ago, that debacle with my other cabled pullover, St. Brigid, kept me from wanting to work on a second one. So I figured that since I'd be trapped in the car with nothing else to work on for a few hours... that would be a great time to bring this with. Now I'm about 8 inches into it and my love for the project has been rekindled! 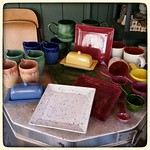 I also had my first kiln firing of the year - it was a total success, I love everything that came out. Aren't those plates the cutest? I'm working on a set of dishes for some friends of mine; they already have HaldeCraft bowls, and we're now working on two different plate sizes. These are the smaller, the salad plates -- and I'll have a post about them all when I get all twelve done! 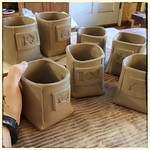 I also finally had some time to do some hand-building. Back in late September or so, I watched this video excerpt on Ceramics Daily with Liz Zlot Summerfield. I was so excited about what I saw in those few minutes that I bought the rest of the video... so if you like these new forms even half as much as I do, you can thank her! This is so similar to what I was already doing with the Marie bowls that I almost can't even believe I didn't come up with this on my own. I can see so many applications, too, not just mugs and tumblers... but teapots, small garden containers, butter dishes... oh, yes, my brain is on fire. 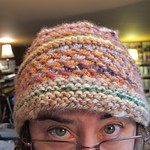 Lastly, I got a little bit of knitting finished. This is my second entry in the 15-in-2015 and yes, it is the same pattern as my first entry... in the same yarn, but reversed for primary and accent colors. Now I still have yarn, and I'm eyeing a third bit of handspun to go with what I have left... sigh. I think I've doomed myself to make nothing but this hat this year. But at least I will have a good number of quasi-matching Christmas presents come December, right?!

That's it... that's been my last week-ish. Week-and-then-some. How about yourselves? What have you been up to?