This has been one of those weeks where everything has, well, not gone BADLY, but definitely not as planned. I've absolutely not gotten the work done I wanted to this week.

In ceramics, last week I was supposed to make new slab-rolled soap dishes, a prototype of which I had made months ago. Then this week I was going to make herb markers (to go with my vegetable markers), and if I had time after that, I was going to make some new little buttons in the knitted yarn design. In there I was also going to practice throwing, with about another 25 pounds or so of red clay.

I'm just now getting to the soap dishes today... so that should tell you where I am with the rest of my work. Sigh.

Remember the fruit and veggie markers? The herb markers will look like these, only... with herbs. 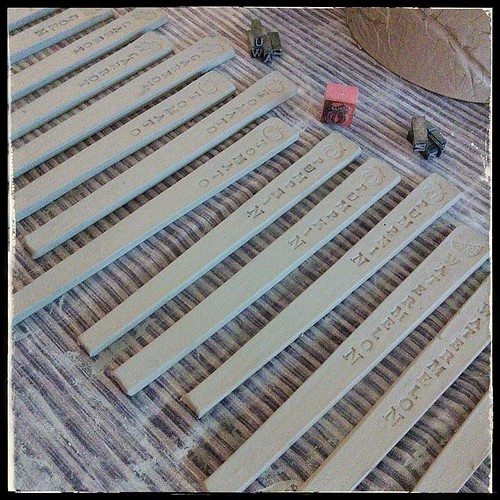 In soap, nothing, not a stitch of work.

In yarn, also not a stitch of work. I have about a dozen more skeins of yarn to wind for March yarn club, but it's looking like that'll be a "next week" project.

Why so low on work this week?

Sunday we found out my Aunt and Uncle, out of town until late Tuesday, were coming back Sunday instead -- so because my husband's parents were still out at his sisters, leaving early Wednesday morning (so unable to get together with my aunt and uncle, whom they adore)… I whipped up a dinner plan that had us driving out to Lafayette Blue Springs late Monday afternoon (and Monday after lunch was spent grocery shopping and prepping… so no work got done).

Monday right before we left, I discovered my personal debit card - which I rarely ever use online, unlike my work card, which I use ALL THE TIME - was compromised, and someone bought over $100 worth of machine parts at a small town in Canada. So yesterday morning I spent a good portion of time at the bank, cancelling my card, getting a new one, and filling out paperwork stating that I had never made that purchase (or the $80 one that came through that night). My bank, a locally owned credit union, gave me the money back immediately and will take care of the process of research/tracking/legal things involving, I don’t know, whatever magic legal thing that happens when this happens. I love my bank. Still, yesterday, not a lot of work got done.

Meanwhile, in working on a set of gloves for my Realtor (speaking of house stuff), my needles broke. 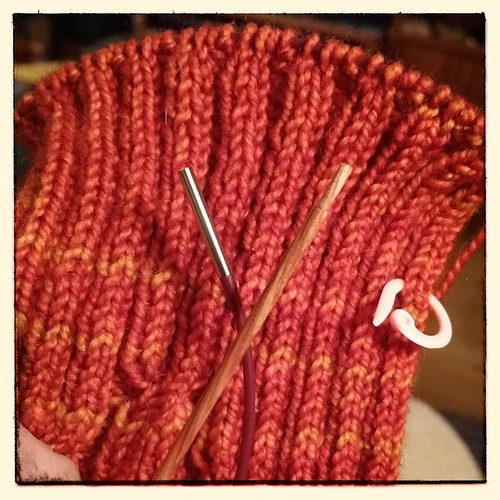 I had spares, though, so I’m down but not out, and I’m about a third of the way done with the second glove. We were able to take Tim’s parents out to the property on Saturday, and the Realtor let us into the house, so I was able to get her to try the first glove on. Not only does it fit great, but the color that I chose (because it was on top of the pile) turns out to be her favorite color. She’s floored, has never had anyone knit her something that nice. D’awwww.

While I may not feel very accomplished this week, I do feel positive. Things may actually be looking up about the property, and my thoughts this last week have been very positive and focused on the future -- even though I tend to be hard on myself for not getting ALL THE THINGS done, one of the reasons I love being self-employed is ... well, if I worked for someone else, this week I would have had to ask for a few days off for personal reasons, but being self-employed means I don't have to explain why or justify it. And I know my work will get done, because I know myself, my work habits, and I love what I do. It's a good life.