OK, so, remember when we were working on the studio? Nothing new has happened there, this week. 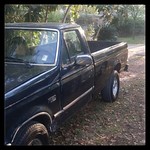 You see, the studio renos were Plan B. Plan A was to build a back deck. Plan A was to get the back deck supplies with That Poor Man's new truck. His new used truck, because he wanted one with an 8' bed, and they don't seem to really make those any more -- at least, not for the price he wanted to pay, to buy a beater truck that would last long enough to get us through these renovations. So the... the day after he got the truck? The next day? It wouldn't start. We got it towed to "our guy" -- Billy, of Billy's Towing & Automotive, who I've known since he owned a gas station/repair shop down the street from me; he's a second or third generation mechanic, and let me tell you, that man loves cars. And he's honest to a fault. I found him when I was single, asking my other single lady friends for advice on a mechanic who didn't talk down to women or ask to talk to "the man of the house" if he called about repairs. That was going on twenty years ago and Billy has seen me through four cars and an accident. But I digress!

Now I don't even remember where I was! Ah; yes. We got the truck towed to Billy's, who kept it for the weekend and fixed one of the two fuel pumps (he said we could wait on fixing the second, or live without the backup tank) and put in a new radiator. We had the truck back for about two days when it had to go back to the shop for new brakes. HAHAHAHAHA. Sigh. 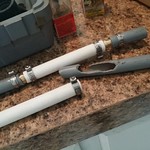 My point is that Plan A had been to use the truck to get decking supplies, and clearly that wasn't happening. So Tim started in on the studio over the weekend while the truck was in the shop. Then when we got the electricity turned on, we discovered that our interpretation of "inspecting the water" is different from what the second inspector thought it was, because when we discovered not one, but two gushing pipes under the house, we were curious as to what was actually tested. Was it tested for... I don't know, amount of water under the house available for frogs? Because the big frog That Poor Man interrupted, gazing adoringly at the stream of water not three inches from his bulbous little head (the frog's head, not my husband's), seemed thrilled at the prospect of a waterfall (again, the frog was thrilled, not my husband).

I'll spare you the week-long saga of trying to fix the water; suffice to say that the pipes were put in 20 years ago and are no longer compatible with today's pipes, but we think we've got a fix and if you hear a shout of joy late this evening it's because we now have both electricity AND running water. Needless to say, though, that the water thing interrupted the Plan B of working on the studio, and became Plan C. That did give us long enough, though, for That Poor Man to order supplies for both the back deck and the porch in front of my studio, and because his materials list was so long, Lowes is going to deliver (tomorrow) so the truck - while fine now - is off the hook for decking supply fetching. 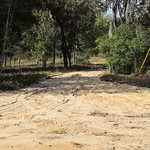 Another thing the delay did was give That Poor Man's aunt and uncle time to come down from North Carolina. She is a potter, and is itching to help with my studio, and he is an electrician, whom we trust to help us get the jerry-rigged studio electrical wiring up to code (and being family, their rates for help are quite reasonable). NOW. (You knew there was a story here, right?) They drive an RV. We weren't sure, because of how the driveway was (about 50 or so feet of it is pretty much just deep sand). It's been getting better the more we drive on it, but there was a worry that the RV would sink. So they're staying at a park up the road for a few days.... we were supposed to start getting the driveway worked on last week, but the guy we called stood us up, and we didn't really have a backup plan for that. While The Aunt and I sat up in the house and talked studio set-up and ceramics, The Uncle and That Poor Man drove around the property and assessed how to get the RV in there. He is sure that if he drives partly on the grass for those 50 or so feet, the RV will be just fine. But that would mean taking out a pair of small Turkey Oaks right by the corner of the driveway. It's not like we don't have another 15.46 acres of trees, so down they went. 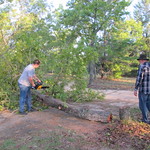 And down went this one, as well, to make a curve a little easier for him on the exit. This tree was already half-dead, so it was also not a big loss. It wasn't the last thing that needed to come down, there were a few limbs along the drive that while higher than our cars, would hit the RV smack in the face. But the chainsaw must have thought it was quittin' time, because right after this photo the chain slipped and That Poor Man had to finish the tree off with an axe. (He'll be able to repair the chainsaw, it's fine, he just needs about an hour and would prefer to do it while sitting at a table, not while leaning over the back end of a truck.)

Soooooooooo. That's where we are right now. Tonight we're fixing plumbing (or else). Tomorrow is deck material delivery. Friday The Aunt and Uncle will come in with the RV. Saturday we'll get a new stove and fridge for the new place. Sunday... I have no idea, I guess we'll do whatever life throws at us, or any one of the above things I've listed that we might not actually get to when I think we will, because, life. Hahahha, what a sense of humor life has.

And that's where we are! I hope all y'all are having a great week!