Picture heavy post! I've been getting some organization done lately in the studio, as much as I can, and I'm excited to share with you how it looks (even though it probably looks messy; Martha Stewart doesn't live here, this is a real working studio!). 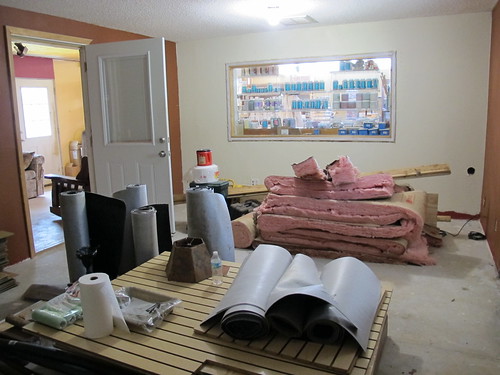 This is part of my office. The jars of glaze on the other side of that window aren't always going to live there (I hope - they really make the room dark!). The pile closest is a bookshelf with some wood piled on top of that with some slatwall piled on top of that. The slatwall is from my old yarn store, Hanks Yarn and Fiber. At my old house, I used the hooks to hang my coffee mugs on, and I plan to do the same. I have two sheets of it (one is smaller than the other) and one will go in the house and the other in the studio.

In back of that is a pile of insulation, which can't get up into the attic soon enough. It's hot as blazes out, and the AC is a trooper but with no insulation in the attic and no ventilation, the poor thing just can't keep up. Anything in the studio after about noon, unless it's pouring rain and cloudy, is sweaty, sweaty work. 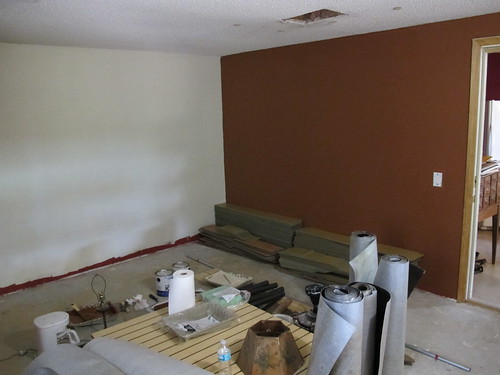 This is the other half of my office. The piles of boards is the salvaged laminate flooring from the old house (we're going to redo the entire house in the same flooring, as there's still some carpet over there that was there when I bought the house in 1995). That'll be put down in this office. Also, a door is going to go in that corner, leading out into the garage portion of the building, where my kiln is; that way I don't have to walk outside and completely around the building in the rain in order to load/unload the kiln. Yay! 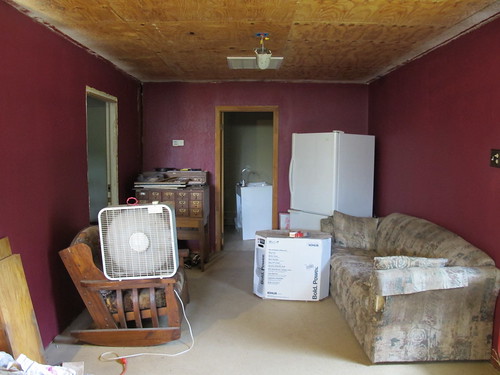 The seating area, marginally more setup than last time I showed it. There will eventually be a coffee pot and a microwave on top of the card catalog in the back corner, and it looks like there might be enough room for me to put my sewing machine just this side of the chair with the fan sitting on it (the fan won't live there after the insulation goes into the ceiling).

You can also see the new toilet we bought for the studio bathroom, and that's a sink, just inside the bathroom door. I'm a little closer to having a working bathroom in there!

Once we get the bathroom working, and there's a microwave and coffee pot, and as you can see there's a fridge... and that couch is a fold-out bed... I might never leave the studio. Heh. 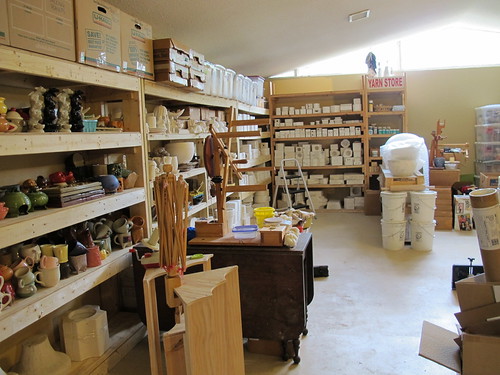 My finished ceramics on the shelves closest (those will go into my office, once we can build shelves in there, after the flooring is put down). Then those shelves will house greenware and bisque. Then there are my molds past the finished work. On top is storage; extra packing peanuts, yarn blanks, boxes I use for transporting ceramics to shows. And of course my yarn winding setup right in front of everything... it's not always going to live there - eventually it'll be on its own unit in a corner that currently has drywall and plywood leaning up in it. 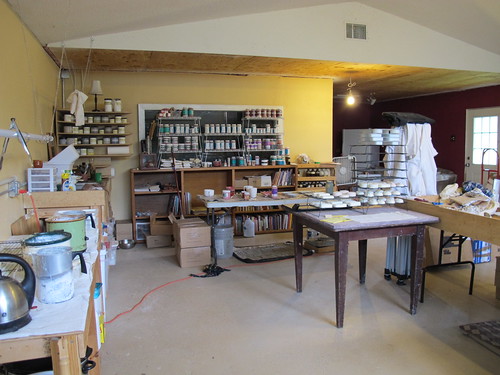 This picture is taken from where the afore-mentioned drywall and plywood is. This is the dye bar, the sink, and then the glazes blocking the window into the office (again, those won't live there forever). This is the corner where I feel I get the most work done!

Things might seem like they're going slowly, and ... well, ok, they are. That Poor Man, my contractor/builder/fix-it guy has had a major project rear its head at work, and has had to work almost every weekend since the end of June. So he hasn't had a lot of time to work on finishing my studio. Plus, if you don't already know, the same dog that fractured my finger broke his finger also, a couple of weeks ago. Same finger, other hand. His break is not as severe and didn't need surgery, but... still. It's all kinds of awkward around here.

Hopefully things will even out soon and we'll be able to get this studio up and running at 100%! I do have to say, though, that even with things unfinished, and not having an office or working bathroom in the studio yet... it's still a looooot easier/more functional than my setup at the old house!