My friend Rhea agreed to come with me again this year (I guess the cat under the hood and the dead battery didn't scare her off last year) and we got a good early start. We were there at the hotel and set up by about 4:30, after which we checked into the hotel and ran off to get an early dinner. 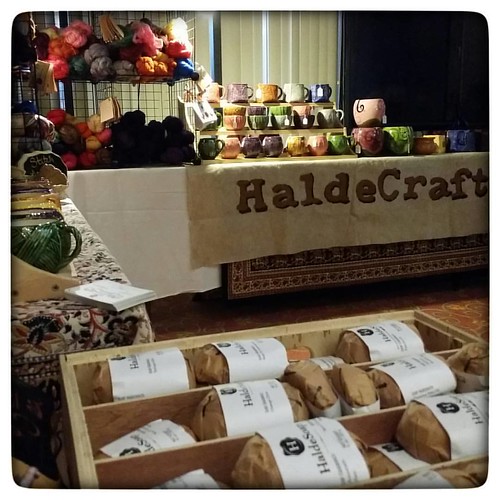 When we got back from dinner we opened up the booth, and sat around for a couple of hours. It was dark in our corner - darker than the last couple of years, so Rhea (bless her heart) braved Orlando traffic and ran out to get me another couple of lamps for my booth. I had two, but they just weren't cutting it. After she got back with the new lamps and we plugged them in, it seemed a little brighter, and I was busy the whole time she was gone so clearly it didn't hurt the popularity of my booth! 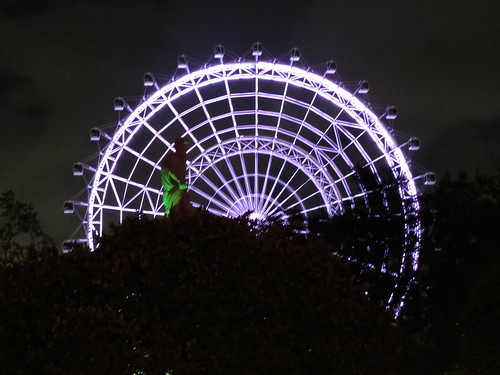 The hotel has long had this ornate fountain out front, but in the last year there's been a sort of ferris-wheel type thing built a few blocks away - it kind of reminds me of the London Eye - and I had to get a nighttime picture of it. We didn't have time to drive over and check it out, but it seemed like the kind of thing that would either be extremely fun, or panic-inducing.

I had noticed earlier, when checking into our room, that we could juuuuuuuuuuust see the top of the ball at Epcot out of our window... and that meant that somewhere else on the horizon, was just about my favorite place on earth... The Magic Kingdom! We wound up being able to see the fireworks from our room. 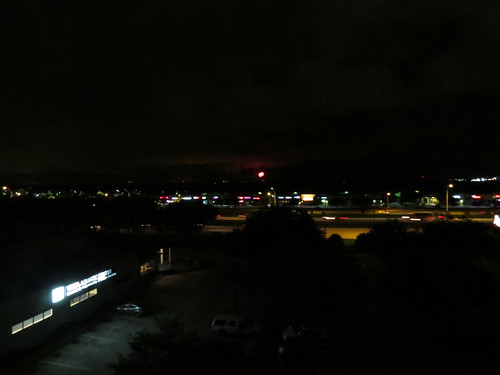 What's that? They look pretty far away? Let me get in there with the zoom of my new camera.... 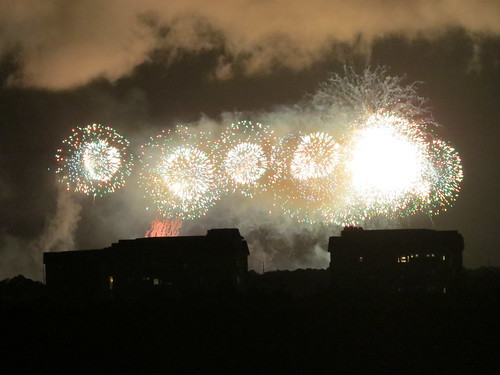 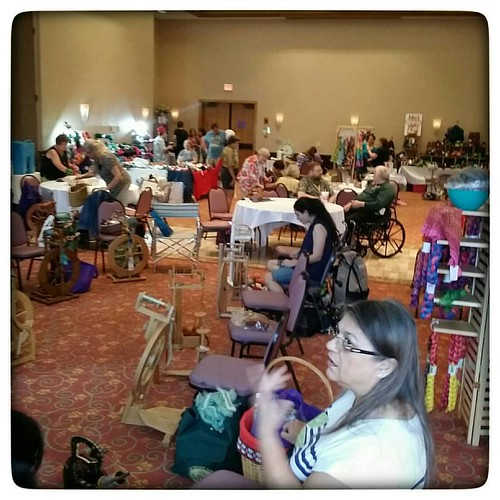 The next day was super-busy, and super-fun. We had a wonderful time catching up with people we only see once a year (and wish we saw more often), and our booth was hopping most of the day. 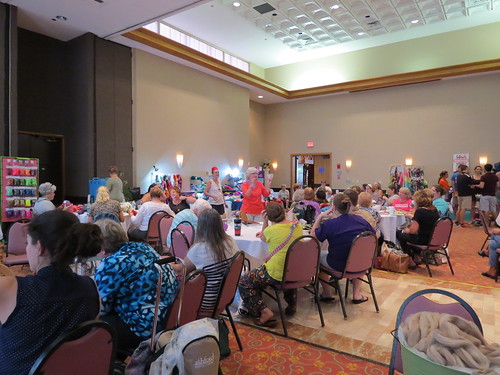 After lunch was the auction, and I was so humbled and so overjoyed to see the six limited edition Fiber-In mugs I made go for quite, quite more than I thought they would! I got a little teary during the bidding, to be honest. I wanted to do something wonderful for Brenda, something that would be limited and a souvenir and something that would bring a little joy from the weekend to the hearts of the people who bid on them, and many of the people who snagged them later thanked me. I was very touched and humbled and glad that I could help raise money for an event I've been going to for almost ten years now.

Saturday night was much like Friday night, with an early dinner at the restaurant across the parking lot from the hotel and then sitting, chatting, helping, selling, and spinning for the rest of the evening. Rhea looked like she could have stayed up a little longer but I turned into a pumpkin by about 10 PM, and we closed up the booth for the night.

Sunday morning was a last mad rush of people buying what they didn't buy Saturday but stayed up thinking about all night, and when things started slowing down around lunchtime, we packed up and loaded up the car. No dead batter this year! Yay! Rhea may even go with me again next year! Let's all try to talk her into it, shall we? Because she is a huge, giant help and she rocks like a big rocking thing that rocks a lot.

A big shout-out to Catherine, too, my moderator on my Ravelry group - she spent a good portion of Saturday on her cell phone calling, texting, and sending photos to many of my regular yarnies who couldn't get to Fiber-In but didn't want to miss out on anything good. She put together packages of what everyone wanted, and I've been getting them in the mail yesterday and today. Thank you, Catherine - I know everyone really appreciated what you did!

A few people have asked me if I have any advice for first-time craft shows, and that's really made me think a lot - I don't think I could narrow it down to just one or two things... so expect a Friday Five post some time soon with my five best tips for surviving a craft show!