Helloooooo! How is your week going so far? What are you up to? My focus this week so far has been checking things back in from Fiber-In last weekend. 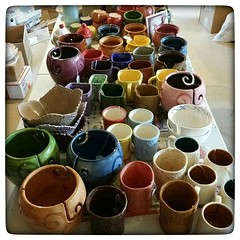 In ceramics, I've almost got all of the yarn-themed ceramics checked in (I still working on those as there are a few things that were new that need to be photographed first). One Vivi yarn bowl came back with me, which I went ahead and wrote a listing for -- that way if there’s one you want, you can leave your email to be notified when it comes back into stock. Interested in different colors? Be a little patient! I plan to make the same style in both the Marie and Grace doilies as well, and those will be in different colors than the Vivi… so just give me a little time and I’ll make them as fast as I can. I don't have colors 100% set in stone yet, but Iceberg Blue, Oxblood Red, and Pistachio will definitely be in the list (feel free to give a shout-out about your favorites).

In soap, the Yarn and Knitting Needle soap has been checked back in - what there was of it, which wasn't much. Soap was quite popular at the show this year! I’ll be making more in a couple of weeks, probably the week of October 19th, so stay tuned on that... I'm looking at temporarily bringing back a discontinued fragrance! 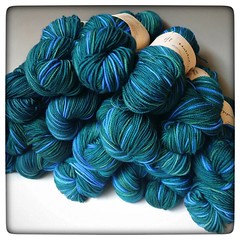 In yarn and spinning fiber, I’ve got both the fiber checked in and the yarn checked in (including the two One Hit Wonders that made it home - one in Moon and one in Elizabeth). I placed an order for more base yarn yesterday, and will start dyeing restocks as soon as that comes in (I still need to check stock on what fiber I currently have; if I have to order more, I'll be dyeing that - barring any shipping delays - the week after the soap). Oh! And Purple Rain! It was a massive hit at the show, and I only have five or six skeins left. I will get those listed as soon as I get the photos off my camera, and I'll start dyeing more as soon as I can (I do have some base yarn I can start on tomorrow, but the rest will have to wait until that base yarn order comes in). Meanwhile, don't forget about Sweet Baby James, back for a limited time in eight different base yarns! 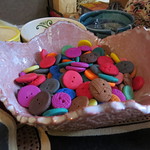 In notions, it took me a while because I went a little crazy, but the stitch markers have been photographed and checked in. Oh! And the buttons! I found them, after losing them for an embarrassingly long time… so I’ll be getting those checked back in within the next day or two, also. Additionally, I found a bunch of bisque buttons I’d made before the move -- full confession, I actually found them about a week before Fiber-In, but just didn’t have enough time to get them in the kiln. I hope to get them painted and in the next few kiln firings. So expect a massive button update over the next little while.

And in knitting, I'm working on a pair of socks that I had passed the heel on and then ripped out as they were too big, and also another chemo hat for a friend of mine. Grr; cancer. No current pictures of either of them (the socks look just like the socks I'd already photographed, only... smaller, and I'm not far enough into the chemo hat to really show it off yet).

That's me so far... what about y'all? How's your week going? What are you working on?