Ever had one of those weeks where everything you try to do takes longer, is frustrating, and comes out wrong? I'm heading into Week Three of that, so maybe it's time to step back. Slow down. Be the opposite of productive. I know I haven't done a WiP Wed post in a couple of weeks, so consider this a Sunday Check-In version of that. 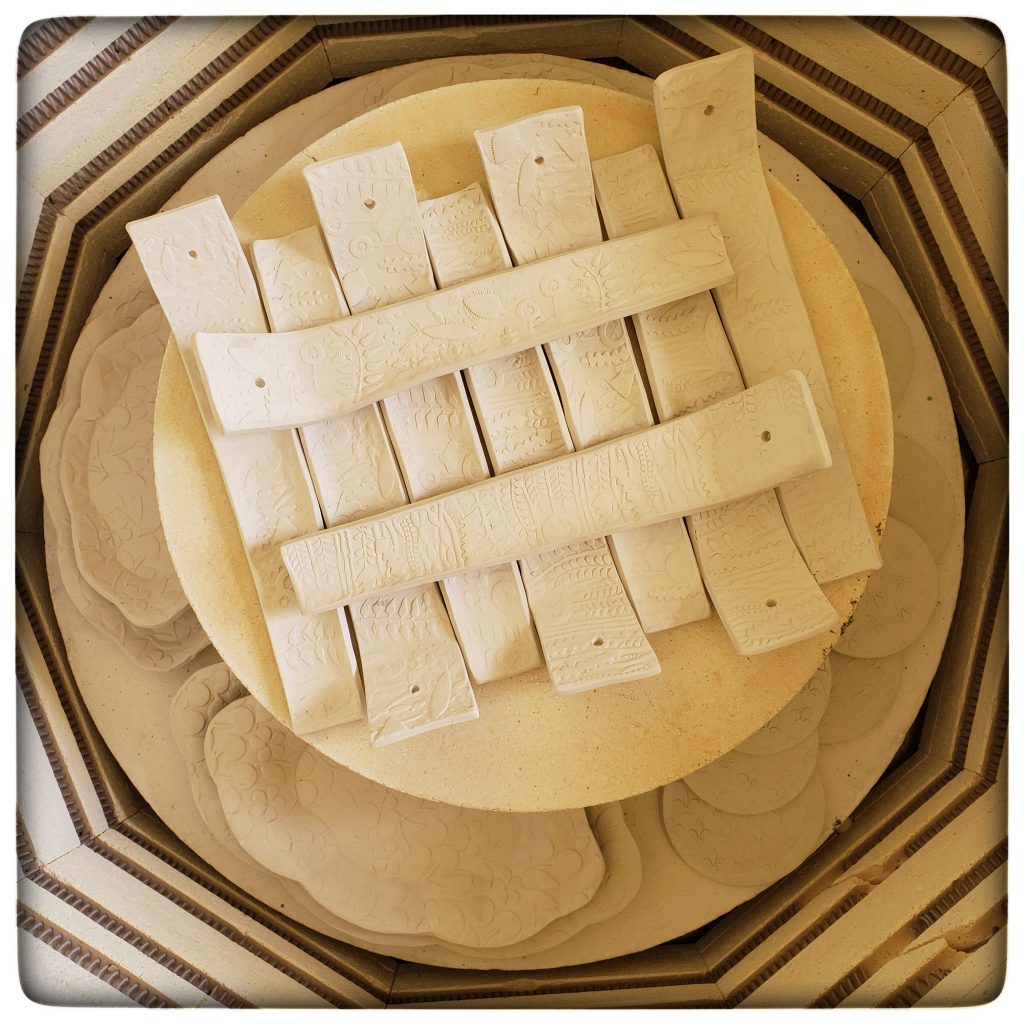 Remember how I joked around that I was having to delay the release of Under the Sea from May 15th to May 22nd, and how I sure hoped I didn't have to delay it again to the 29th? HAHAHAHAHAHAHAHA. So, Big Geek, my large kiln, has had some firing issues lately. Stuff on the top shelf first was over-firing, then under-firing, and so the last couple of times I've fired it I haven't filled it 100% -- why my first reaction was "don't fill it all the way" instead of "figure out why you can't fill it all the way" I'm not really sure, but I'm paying for that now. Friday during a bisque firing, about two hours before it was supposed to finish, the kiln started beeping it's "Danger Will Robinson" beep, and throwing me an FTH error code. FTH means Failure to Heat, and that's kind of an important part of the kiln firing process.

See, about four different things can give you the FTH error, but the kiln is not so smart as to be able to tell me which of those four things it might be. So I have to go down the checklist of those things, test-firing the kiln after each time I replace something, and when I stop getting the error code when I'm firing, that means I have fixed the right thing. ISN'T THIS EXCITING????

Now, the good news is that a bisque firing (when firing from greenware to bisque) is the best firing to have your kiln crap out on you. All of these pieces are salvageable, or will be, when I get the kiln repaired. I could fire a lot of this in Little Geek, but it would probably take four or five firings, and the incense burners are exactly the width of the smaller kiln and it's hard to arrange them in there (I know, I've tried before). With the other glaze firings I need to now move over to Little Geek, it would probably be two weeks before I had everything bisque fired. It may take two weeks to get Big Geek repaired, so I might as well wait.

Which means that Under the Sea is now delayed - I doubt the kiln will be repaired in time for me to bisque fire, glaze, and get everything glaze fired by Friday the 22nd... so I'm looking at least at Friday the 29th before that collection is ready. Maybe even June 5th, depending on (a) how long it takes for the relay to get to me and (b) if the relay is the fix, and I don't have to also order new elements, a new control box for the kiln, or contact the electricity company to somehow get them to raise the voltage we get out here. Or whatever magic stuff they can do to get us more electricity (the fourth thing on my four-part list of "what could be wrong" is that with our house, our studio, and everything that Cetty and Joe with their setup, that there's just not enough power being drawn to the kiln... which is a fix that Clay Electric would have to get in on).

But hey, I could just switch to soap, right? Make a lot of soap this week, maybe have a ginormous soap update? Maybe also make some lotion, because we've all been going through that a lot lately.

Hmmm, these soap molds are starting to show some stress. I should look into buying more. Oh? What's that? The place where, a couple of years ago, I bought these because they were two of the only designs that company was now carrying? Now they're not carrying this line at all? And it looks as if the manufacturer may have gone out of business because nobody else seems to have any of them? That's awesome. Cool cool cool.

So what will my options be when these are no longer really usable? Well. It looks like the trend is towards... good-sized bars with no decoration, or small but decorative guest-sized bars, or a couple of designs I could get into but are made with the cheaper/thinner plastic that breaks down and warps faster than the thicker, or I could switch to way sturdier new good-sized designs in silicone molds that are three times more expensive than the molds I use now, which means I'd be able to make two batches per day instead of six because buying that many at once would be an expense I wasn't expecting. And I should hold off on any unplanned expenses until I figure out if it's a cheap relay that needs to be replaced or perhaps a really expensive control box. Well. Right then.

Oh, and as far as restocking the lotion? So the place I usually get my lotion base from was only selling to hospitals during the bulk of March and April. I see that they've just opened back up to regular sales, so I went to place an order and... they don't offer that lotion base any more. They've reformulated it, and I did buy a sample and personally I love it... but it's a little thicker than the other lotion (I love a thick lotion!) so that means it's not going to go into the squeeze bottles very well. Well, they'll go INTO the squeeze bottles, but not come out as easily. Which means if I go with this reformulation, I will also need to source new containers, which means also sourcing new/different label designs. Now, it just so happens that I found out I do still have some circular labels from when I was doing massage lotion (I used them in the Heartfelt Connection gift box, when I had to source a completely different lotion because of my original source being closed to non-medical sales for a couple of months). So some of that work is done - or at least done enough that I can pick it up and tweak it without a huge amount of drama.

Change is just... frustrating. New containers. New labels. New product photos. Entire different fragrances, since a couple of what I did make in lotion the last time I made lotion, I don't have any more - Rosemary Mint, In the Wild ... some of those weren't doing well as soap fragrances so I didn't make them as they sold out, but I do still have a couple of the lotions. So what do I do with those if I change formulations and containers? Sell both for a while? Hold onto the new until the old is sold out? What if I have, like, three that never sell?

THESE ARE THE THINGS THAT KEEP ME UP AT NIGHT.

Y'all, I'm not even going to get started on where I am with yarn, this post is already about 1200 words. And I still have to write something today for Patreon. And work on my next chapter.

So. Yeah. I feel like the Universe is telling me to slow down, by... actively throwing road blocks in my way. Maybe I should listen for a minute.