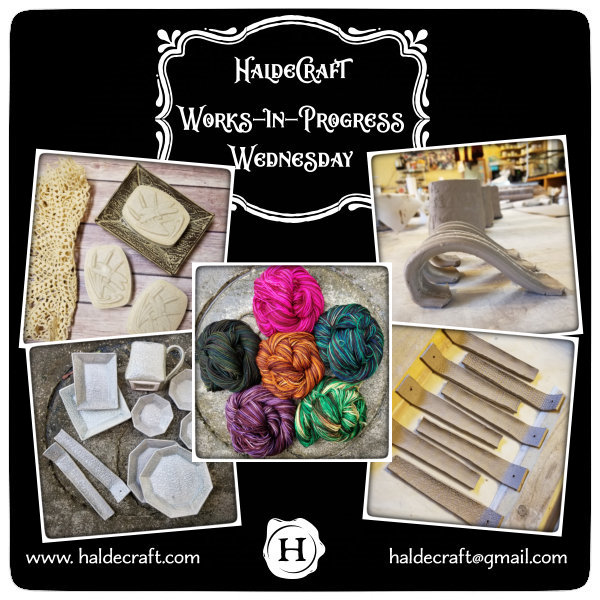 In ceramics, I'm talking about all the new things I've released this week (honeycomb and skull ceramics, and the August Mug of the Month) and I'm working on making new ones (and already making restocks! Thanks, y'all!).

In soap, I'm making a list of soap I'm going to make for the Florida Fiber-In. I'm going to do a special base for this (if it's received well, I'll make it again for GLAM in December). It's a "triple butter" base... Shea butter, mango butter, and cocoa butter. It should have a really good lather and feel very soft. I'll be making it in, oh, my top 20 or so fragrances, and any that don't sell at Fiber-In will go up for sale online after that weekend.

In yarn, I'm working on bringing a new colorway into the shop. It was supposed to be an old club colorway, but I'm making some small tweaks to it... I should have that done in another week or so. I thought about holding onto it until Fiber-In, but that would just be mean!

In knitting, I found a pair of socks that I'd totally forgotten about, in the Coconut Cream colorway, and apparently I got halfway done with them? I'm at the heel (I wonder why I stopped working on them? Did I get distracted?) So I'll finish those up after I finish these Buttercream socks in the Nagata base. I'm about at the heel in both of those as well.

In HaldeCrate, pre-orders are closed, and I have all the yarn dyed and rewound. The ceramics are all bisque-fired, and about half are glazed and ready to be run through the kiln. The soap sets are finished but the hand lotion still needs to be labeled... then the pre-orders will be ready to mail out and any extras will go up online! Yay!

In Patreon, Chapter 12 went up last weekend, and... that's about it, right now. Next week would be a recommendation post, but I think I'm going to do another behind-the-scenes crafting video instead (I mentioned over on Patreon starting to do those instead, and nobody seemed averse to the idea, so...).

Well, that's about it for me. I mean, there are a thousand more things but those are most of the work-and-hobby-related ones. How about y'all? What are you doing this week? New jobs? School start? Learn a new recipe? Get some gardening done? Tell me what's going on with you!