I took yesterday off to go into the Big City and run errands, see friends... so I'm a little convinced that today must be Monday, haha. But it's not! It's Wednesday! I sort of feel like it's one of those weeks before a big week... where I'm working on a lot but nothing is overly photographable, and I'm having fun but there's not much to talk about. As if I'm getting ready for things, doing prep work, revving up the creative engines. 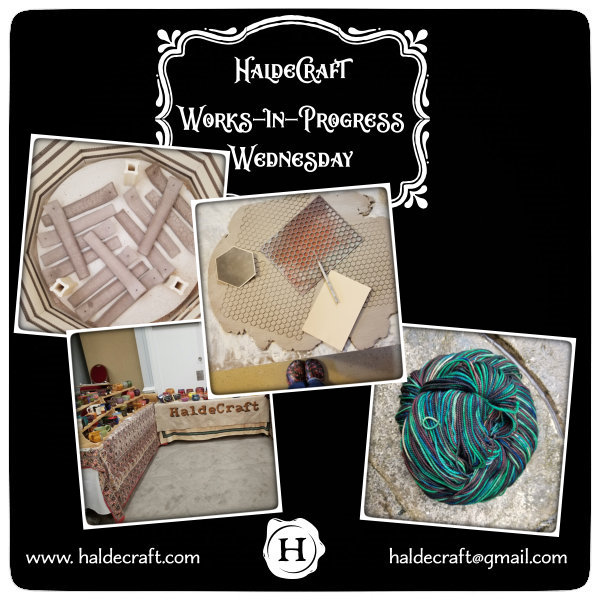 In ceramics, I'm making new greenware in prep for the Florida Fiber-In, and glazing recently fired bisque. I'm working on the September mugs (cutting it a little close, I know).

In soap, I'm ... wait for it ... making soap for the Florida Fiber-In! I have a small list of restocks to make as well, but I want to get the Fiber-In soaps finished first so that I have a long time to wrap them here and there as I'm pausing between doing other things.

In knitting, I think I mentioned the socks I found that I'd gotten almost to the heel turn with, in the HaldeCrate Coconut Cream colorway? I can not for the life of me figure out what pattern I was using. I've compared it to about six different patterns and it's a little like all of them but different enough that I can tell that's not the right one. So I might go ahead and rip them out and restart on a new pattern. Sigh. Oh, and I'm almost done with the Buttercream socks in the Nagata base... just a few more inches of leg on each one, and then the cuffs and heels. Should be done... next week, maybe?

In Patreon, I've switched out some of the themed non-fiction posts that I do on non-story Sundays, for behind-the-scenes crafting videos and sneak peek photos of some things I've been working on at HaldeCraft but haven't talked about yet. Those posts are available to all levels of patrons.

In HaldeCrate, and I just realized this is probably why I'm not too deep into anything else this week, I'm getting ready to mail out pre-orders and list extras. I'm boxing up pre-orders today, and tomorrow extra stock will be listed on the website. Yay! And that means I'll be talking about the next HaldeCrate soon - it'll be a Fall/Winter themed one and I'll be making the official announcement probably late next week.

In other things... I accidentally bought a new phone yesterday, haha. Like ya do. I was going in to get a Jetpack/mobile hotspot dooby-thing (yes that is totally a technical term) and also to ask if they had any Note 8s left. It's time to get That Poor Man a new phone (I mean, he doesn't have a flip-phone, but it's close) and I love my Note 8 but don't want the Note 10 because I need the headphone jack as a backup for swiping cards at craft shows. So I thought I'd get him the same phone I have so that when he has problems with it I can easily fix it. But, because the 10s are coming out now, they have already sent back the 8s (a long time ago). But! They had one 9 left. Well, I'm the tech junkie in the house, so (and I'm sorry honey, I do love you, but) I'm not getting him a better phone than I have. So I bought the 9 for me - it's almost completely similar to the 8 - and later this week we're going to switch out his S3 for my Note 8. New phones for everyone! Anyway, today as I pack up HaldeCrate I'll also be inputting my passwords into a hundred apps on my phone, haha.

And... that's all, folks! How about y'all? How's your week? What are you up to? What are you doing, not doing, thinking about doing? How are your hobbies? Your work? Did you send kids off to school this week? I wound up spending about half an hour consoling a mom I didn't know in the grocery store yesterday, because I came around the corner and she was crying, and I can't just not ask if someone's OK. She had sent her 17-year-old daughter off to college and was having a time, dealing with it. If you're like that mom, I'm hugging you. Anyway! My point is... tell me what you're up to! How you're doing! Inquiring minds want to know!